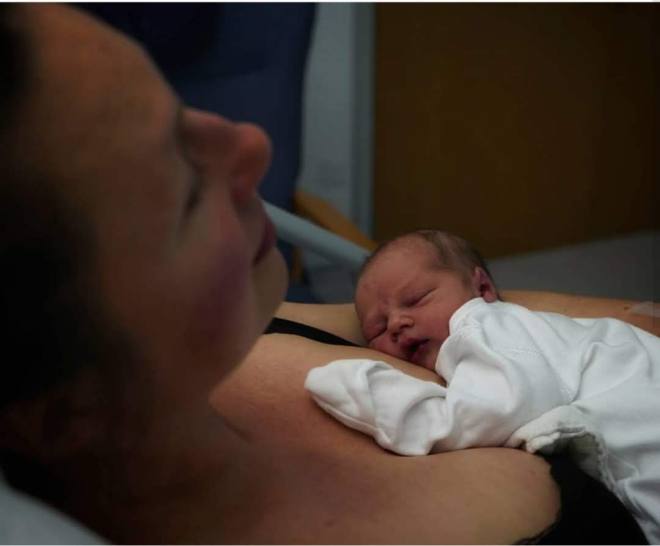 My pregnancy was incredible, I felt good besides the first 12 weeks where I felt nauseous but was never sick. The second trimester I glowed, I looked the healthiest in my life 😊, up until my 39th week I went on daily dog walks and slept well. Due to turning 40 and having had a cervical operation just over a year ago, I was on regular cervix measurements until 24 weeks and then gap and grow scans after that.

Due to my age the consultant had mentioned being induced at 40 weeks, I initially didn’t agree with this but as time moved on I was very excited to meet my baby so I agreed to come in to the hospital at 40 weeks.

I started the Positive Birth Company online hypnobirthing course at 30 weeks and instantly loved the combination of science and natural techniques to help with labour, I completed the course feeling informed and positive about what was to come. I recommended it to everyone I knew, most of the ladies in my NCT group also purchased it and liked it. I read nearly every birth story that came up in the Facebook group, loving all the variations and the open outlook to whatever happened.

I initially made 3 birth plans to cover what I thought were all my bases – home, hospital and c section. As my own birth became closer I realised that for me the preparation was not in having a plan but having a very open mindset and being able to talk every situation through. From all the stories I had read and listened to, I realised birth never seems to go the way anyone ‘plans’.

I went on maternity leave at 38 weeks, the first week I felt amazing I even painted the living room a snazzy new colour 😊 From the Sunday of my 39th week I started getting very strong Braxton Hick contractions, these went through most days, on Monday morning I thought ‘this is it!’ as the contractions become closer together around 3am and then lessened around 5am.

The Thursday we went out and got pizza from our favourite pizza van, I had just finished and got up from the sofa when I felt my waters go, I couldn’t believe it, I was going to avoid being induced and have a natural labour, I was elated!

Tim called his brother to look after our gorgeous beagle and we made our way to the hospital.

I was adamant we would be checked over and then allowed to labour at home for the next 24 hours, Tim was the voice of reason ‘let’s just see what happens’.

My waters were initially clear, but when the midwife checked my pad when I arrived there were traces of meconium, I was staying in the hospital until I had my baby. I couldn’t believe the one situation I hadn’t thought about was happening, ironic as I was fully aware that anything could happen at this point.

My baby’s heart rate started being monitored along with my contractions. Around 11pm I was moved to a room on the labour ward, Tunbridge Wells hospital is incredible, everyone gets a private room at every stage of care, antenatal and postnatal.

The midwife wanted to see if I could dilate from 3cm to 4cm to avoid going on a drip to induce labour. I dimmed the lights, popped on my diffuser filled with lavender, some chilled music and began walking around the room, taking small naps in-between to help my body along.

At 4am I hadn’t dilated any further so the syntocinin drip was started to speed things up, the reason for this is to help the baby out as they didn’t want him there too long due to the meconium and the dangers of him inhaling it.

The drip was insane, within 1.5 hours I was having powerful contractions, we started noticing that baby’s heart rate dropped with every contraction, the midwife let it go for a bit and then turned off the drip as she was concerned that his cord was wrapped somewhere which is why his heart rate kept dropping.

A new circulation of midwives and Dr’s started, the Dr wanted the drip to go back on to see if I could progress any further, I knew baby’s heart rate would still drop but I agreed to see if I could birth vaginally. I started using the gas and air and it was a good distraction, I kept repeating ‘My surges cannot be more powerful than me as they are me’ to myself. Baby’s heart rate dropped more as the contractions intensified, we tried different positions like lying on my side and that only made his heart rate worse. I was now getting concerned and at this point, the midwife called the Dr in, I asked what the options were as I wasn’t happy with the one my baby and I were currently in. The Dr told me I could stay on the drip and labour which may take another 10 hours based on information from other first time Mum’s, I felt this wasn’t a great option, I hadn’t eaten for 12 hours and I didn’t want baby’s heart to be dropping every 3 minutes for the next 10 hours. The Dr asked me how I would like to give birth as he could see I was unsure about continuing on the drip. I had a good chat with Tim and we decided baby was not happy and neither was I, we didn’t want to prolong this situation and potentially harm him or worse, lose him, so I asked for a c section.

I was in theatre within 15 minutes, everyone was incredible, so friendly and explaining everything that was happening, the radio was on and the atmosphere was one of relaxed, happy, efficiency. I had the epidural and that felt incredible and strange. The contractions stopped and I could feel people touching me but not the pain that should be associated with some of the actions.

The big thing was to hear Ethan cry as he was born, this meant he hadn’t breathed in any meconium, Tim and I were clutching each other’s hands behind the screen they put up so you don’t see them doing all the cutting. I heard the anaesthetist say that Ethan’s cord was around his neck, that explained the dipping heart rate, we were then told later there was meconium over the placenta and his head – I felt even more empowered that I had made the right decision for me and my baby.

We suddenly heard this piercing cry and both of us burst into tears. Ethan was born at 11.59am, he was checked over by a paediatric doctor and was healthy. Tim had a cuddle, then he was wrapped up and passed to me, I couldn’t believe it, he was here and he was safe. I cuddled him the whole time I was being stitched up – which took longer than his being born!

We were set on his name being Magnus, we were told he could be around 9lbs so the name suited but when we saw this little guy who actually weighed 7lb 5oz we didn’t think Magnus was appropriate, Ethan suited him a lot more.

The staff congratulated us both as they left theatre, we were beaming! We moved back to our room and I had immediate skin to skin and tried breastfeeding, Ethan latched on straight away – just like his Mum, loves his food already 😊

We left hospital the next day and have been loving life with the four of us ever since. The recovery from the c section is incredible, they don’t cut through the abdominal muscle any more so I was pain-free after a few days and able to move around freely, picking Ethan up and getting on with things in the house, just being mindful to not do too much too early on.

Thanks to podcasts about birth stories, the hypnobirthing course and generous people who shared their stories with me in person, I adapted my mindset in the last few weeks of my pregnancy from one of planning to accepting any situation and adapting to it. This gave me a very positive start into motherhood from a birth that if I had known would have been my birth story I may have been upset with in my early pregnancy, instead, it is one of the most empowering and confidence building experiences I have been through yet.

I am proud of my body, my mind and my birthing partner – Tim, we created the most amazing little guy and brought him into the world the safest way we knew how.

This new adventure is only just beginning. 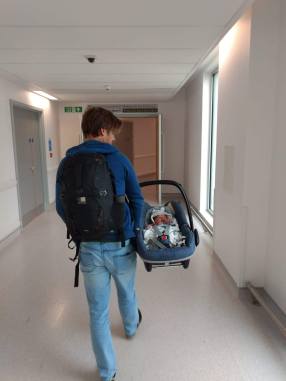 7 thoughts on “A new adventure…The start, my birth story.”