“Of all the paths you take in life, make sure a few of them are dirt.”
― John Muir

“The Fan Dance is a gruelling 24km non-navigational race over two sides of Pen Y Fan, the highest mountain in the Brecon Beacons. This infamous route has long been a part of SAS (Special Air Service) and SBS (Special Boat Service) Selection and is considered the yardstick of a candidate’s potential to perform well on Test Week and ultimately pass the Special Forces Selection programme.”

Sounds pretty awesome right. AEE offer seasonal variations of the Fan Dance,  a Summer and Winter version. I did the Summer one two years ago and was hooked. A no-nonsense event where finishing is everything,  not for a medal but for the shear elation of survival.

I signed up to the Winter edition in September and Tim eagerly signed up with me. I had watched the videos of previous winter events and was excited. Fast track to a week before and hearing that temperatures were falling over the UK and snow was forecasted; suddenly I wasn’t so excited. Nerves were creeping in and a feeling of being under prepared was haunting me. The upside to this event is that you don’t have to navigate and there are RV (rendez vous) points regularly along the route, all you have to do is be adequately dressed and have sufficient nutrition.

We arrived at the Storey Arms Centre in Brecon with time on our hands. We donned our winter gear and packed the essentials and headed off to register. I forgot my ID so ran back to the car, on returning to the tent the line was a lot shorter. Ken Jones appeared, looked at his watch and declared registration closed, as advertised, as it was past 0845. I couldn’t believe it. Luckily he must have seen my forlorn face and recognised it from previous events and said I was the last person to register, I was in!!

I had been keeping an eager eye on the weather all week, previous videos of the Winter Fan Dance put me on edge highlighting low visibility and plummeting temperatures. A weather check on Friday had stated clear, sunny skies with no snow.

We made our way past the iconic old red phone box for our safety briefing, framed by darkening skies and falling snow, along with a chill the doubt was starting to creep in.

The group I was setting off in were all doing the Fan Dance ‘clean fatigue’ which means you only carry safety equipment in your pack as opposed to meeting the weight requirement of 35lb for the loaded race, who had set off an hour earlier. As we were carrying minimal equipment Ken wanted to see we were prepared for the worse by displaying our warm jacket that would be used if we were held stationary due to injury, for once I was well prepared and quite proud of my newly acquired down jacket. A few were pulled aside and I was thankful that I wasn’t in the spotlight again for bad admin.

We set off up the path towards Pen y Fan. I instantly slowed, my feet kept sliding and my hands were already numb from cold, wet goves. I was starting to worry..was I prepared? If I felt like this so early in was it wise to continue? I carried on and then my hands warmed from the exertion, the pain was incredible but it was a good reminder that everything was working ok.

I looked up from my path and noticed the sudden change, there was white everywhere and people up ahead were starting to become shadows, it was incredible how quickly the visibility changed. Luckily the DS (directing staff) from AEE had set out bright orange flags to guide us along. On route to the summit we saw a skier setting off the side of Pen y Fan and a few people wearing snow shoes, moving with ease and smiling. Incredible that within a few metres existed people with very different mindsets and experiences.

We reached the RV tent on the summit, quickly stating our race numbers and making clear we were feeling good to the dedicated DS. There are tents with DS set up along the whole route, logging numbers and checking in on participants. It may be a no-nonsense operation but the priority on well-being and safety is paramount and felt by each DS you are fortunate enough to come into contact with.

Even though we’d summited the real test was waiting for us on the other side of Pen y Fan.

The first challenge was Jacobs Ladder, an almost vertical climb down to a windy pass. In the summer this was heart rate spiking, in the freezing cold with it covered in ice, my fear reached a whole new level. I had been dreading this part of the march for weeks, it was heightened by Tim turning round to me saying ‘just take your time, take it slow’. My first foot down and I slid, I stopped, saw another path and took that but setting feet on the ice was unavoidable, I saw a lady in front of me slip but then she just carried on sliding on her bum, genius. In the nature of the march I forgot how to approach things from a slightly different angle, I embraced the ice, slipped and carried on down like I was on a sleigh. I was wary that I was getting wet but it was worth it to negotiate the fear of falling. The path spread out and I could walk on the soft snow on the sides, we set off with a good tempo. We checked our mileage and only 3.5 miles had passed, how could we not be further in. Then we caught sight of the Roman Road, it seemed endless. We walked and ran when we could to try to break the monotony of this path. The first of the loaded participants started to appear. These people are formidable, the packs they carry are humongous, they steadily put one foot in front of another, head down and ploughing on. My respect for anyone doing it loaded is then heightened by the look they carry on their faces, a combination of focus, determination and grit. On top of all that, these guys are the ones who offer words of encouragement first, to me, doing it clean fatigue. Truly humbling.

The miles clicked up slowly, and eventually we reached the half way RV. DS Biggs kindly told us we had only just made the cut off time, so we abandoned our scheduled relief stop and headed back up the Roman Road. Not only is this part of the march tediously long but on the return you are steadily making your way continuously uphill, all the way back to the summit.

I find before half way I am excited and eager to get to there, at the turn around point the knowledge sinks in that you have to repeat everything you have been through and it’s unavoidable as there is no other way to reach the old phone box. I settled in to a pace and took it in my own time.

The Roman Road stretches out in front of you after the RV, you can see people making their way along the road and up the sides of the peaks towards Pen y Fan. Jacobs Ladder catches my eye with little specks of people that appear to be stationary.

The weather changes within a few steps, from sunshine and rocks underfoot to snow and ice on the path and air cold enough it feels like its freezing the water in your eye balls. There are a lot more people on the path now a good mix of load bearing and clean fatigue participants. I kept sliding on the ice. Whilst I was behind a load bearing guy I watched how he walked as he barely slipped, I copied his steps and found myself moving more smoothly.

I found myself heating up and becoming out of breath and realised I had reached the lead up to Jacobs Ladder. The adjust in mindset caught me by surprise, I find myself just looking down, placing one foot in front of the other and not thinking about where this path lead. I knew I would reach the top but it didn’t help to focus on it, it was soul sappingly far away so the focus became each step. I knew when the top was approaching as I felt the urge to quit, always when it just gets too tough, it ends, but you have to push through that final bit of pain to reach that small achievement. The rocks surrounding were so icy, I wondered why people were crawling but when I put my boot down I nearly slid a few meters back. I could see Tim encouraging me on by just looking confidently at me. Afterwards he showed me a picture he had taken, I feel this captures the desperation to reach the top of Jacobs Ladder.

A few miles left to go, we summited for the second time that day. The visibility was so bad that any photos at the top seemed pointless. We took this one on the path to the summit highlighting how bad the visibility was at points.

I couldn’t believe how excited I was to get to the bottom. We ran, walked, I fell. We came over the top of a hill and the landscaped changed again, the snow had disappeared and it felt warmer, the path was leading down to the old red phone box.

I reached the bottom beaming, had the obligatory picture with DS Biggs and eagerly pocketed my much coveted patch.

The events ran by AEE are something I have never experienced before and will continue going back to keep experiencing. I aways learn something new about myself. The environment is one of professionalism, honesty, safety and you always come out different. The aim is always to finish but the learning, as always, is made upon the path that you choose to tread. I cannot recommend enough signing up to these events, leave your ego in the car as it will only hold you back and be prepared to meet some inspirational people. 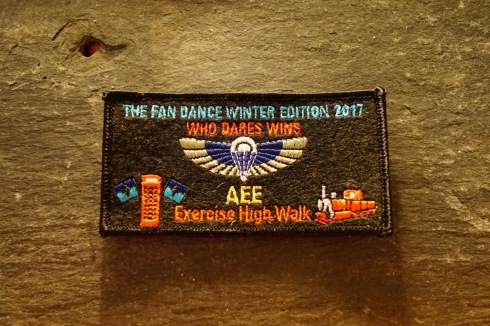